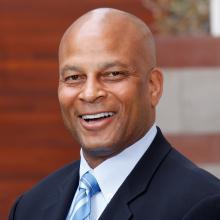 Pro Football Hall of Famer Ronnie Lott joined Pac‐12 Networks as a football studio analyst. Lott can be seen alongside Rick Neuheisel wrapping up all the weekend’s action on Pac‐12 Playbook every Tuesday during the season. Lott played four years at USC (1977‐80) and helped lead the Trojans to two Rose Bowl victories and the 1978 national championship. He was a consensus All‐American as a senior before being drafted by the San Francisco 49ers in the first round of the 1981 NFL Draft. During his 14 years in the NFL, he developed the reputation as one of the most feared defensive players in league history, leading the 49ers to eight division titles and four Super Bowls. He was inducted into the Pro Football Hall of Fame in 2002 and two years later was part of the 2002 I‐A Class of the College Football Hall of Fame. Lott previously worked as an NFL analyst with FOX Sports from 1996‐98.