PAC-12 WOMEN’S ROWING ATHLETE OF THE YEAR: Dana Moffat, Sr., California (Manlius, N.Y.)
Moffat has competed for Cal’s varsity eight since her sophomore season and has gone undefeated with the boat since the start of her junior season. She recently led the Golden Bears to gold at the Pac-12 Championships and helped the team earn the top seed in the V8 at the 2019 NCAA Championships, set to start May 31. Last year, she won the NCAA team title with Cal, won gold as the 5-seat in the V8 at NCAAs and was named a Pocock CRCA first team All-American. She is also a two-time All-Pac-12 selection. In international waters, she helped the U.S. capture gold in the eight at the 2018 World Rowing Championships last summer. The senior majoring in economics also thrives in the classroom, earning 2018 CRCA Scholar-Athlete and first team Pac-12 All-Academic honors. She is the fifth all-time Golden Bear to win Pac-12 Women’s Rowing Athlete of the Year and the first since 2016.

PAC-12 WOMEN’S ROWING NEWCOMER OF THE YEAR: Kelsey McGinley, Fr., Stanford (Westport, Conn.)
McGinley earns the first Pac-12 Newcomer of the Year honor for the Cardinal since 2002 and just the second student-athlete all-time. With Stanford facing injuries in the beginning of the year, the freshman took over the stroke spot on the varsity eight boat that earned silver at the Pac-12 Championships. The Cardinal’s varsity eight earned the No. 3 seed at the NCAA Championships and McGinley looks to help claim Stanford’s first NCAA team title since 2009. She has been a force on the water even before her time at Stanford, winning the Head of the Charles Regatta in the Women’s Junior Varsity 8 from 2015-2017, setting a course record in 2015 and 2017. In her spare time, she is a budding artist and was the runner-up in the 2016 New York Times Editorial Cartoon Contest.

PAC-12 WOMEN’S ROWING COACH OF THE YEAR: Yasmin Farooq, Washington
In her first three years at the helm of the Washington program, Farooq has been named Pac-12 Women’s Rowing Coach of the Year all three years. She also won the honor twice as the head coach of Stanford, earning her fifth overall Coach of the Year honor this year. She led Washington to three-straight Pac-12 titles and earned a national championship (2017) and a second-place finish (2018) in two-straight NCAA appearances. The Huskies enter the 2019 NCAA Championship with the top seeds in the second varsity eight and varsity four. When the Huskies won the NCAA title in 2017, she became the first coach in NCAA history to win the NCAA title in their first year as head coach of a program and the first coach to win the championship with two different programs (Stanford, 2009). This marks the 13th time a Washington coach has been awarded Pac-12 Women’s Rowing Coach of the Year. 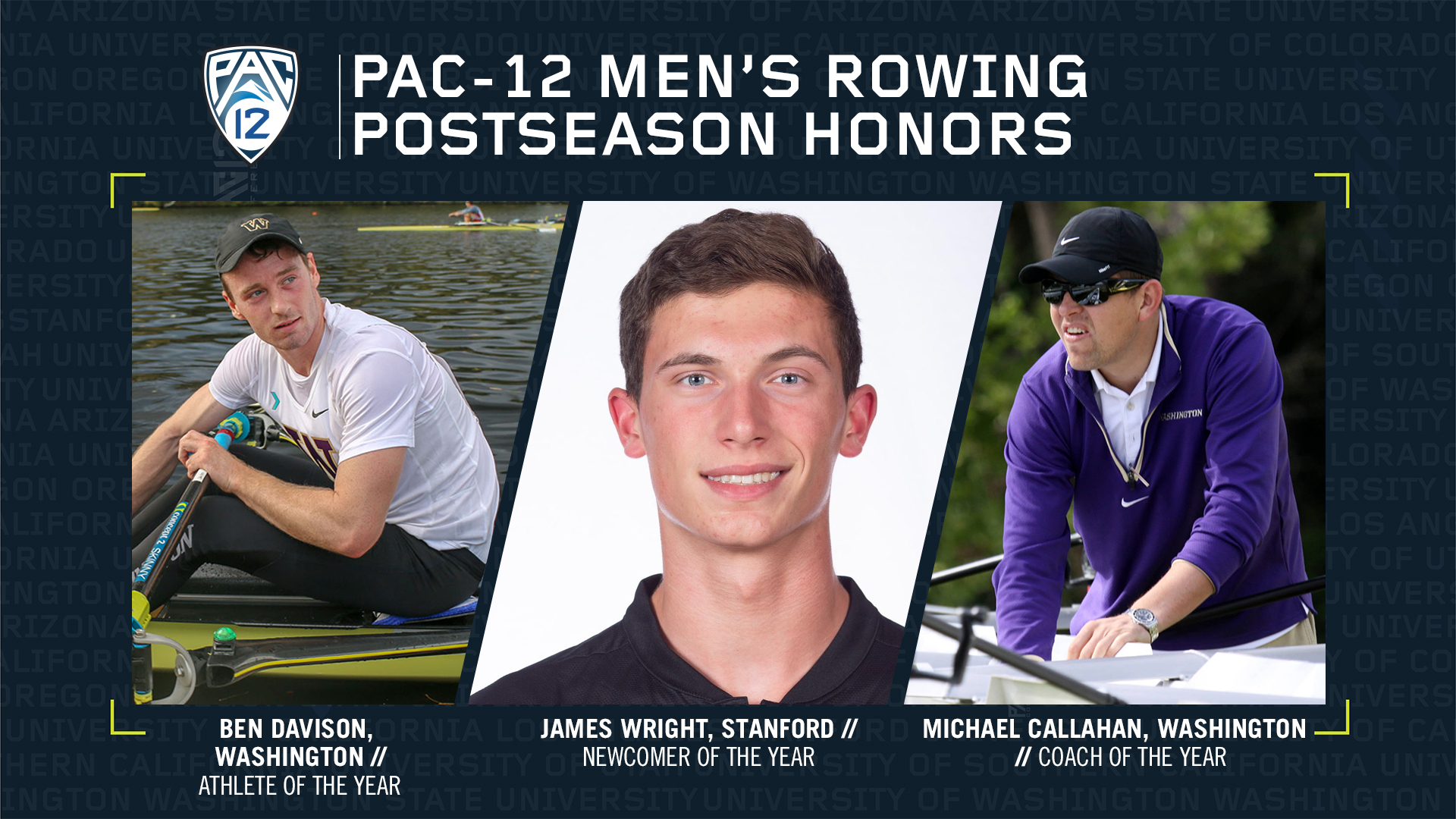 PAC-12 MEN’S ROWING ATHLETE OF THE YEAR: Ben Davison, Sr., Washington (Inverness, Fla.)
Washington’s team captain has rowed for the varsity eight boat since 2017 that has won three-straight Pac-12 Championships. During his four years at UW, Davison also won an IRA National Championship his freshman year and three James Ten Eyck trophies. He won the men’s single sculls in the fall at the Head of the Charles Regatta, beating a field of 30 of the world’s best scullers, and at the 2018 Head of the Lake. Internationally, he has rowed for the U.S. in the men’s double sculls at the 2018 World Rowing Championships and won bronze with the U.S. in the men’s four coxswain at the 2017 World Rowing Under-23 Championships. He is the third Husky to win Pac-12 Men’s Rowing Athlete of the Year and the first since Rob Munn in 2012.

PAC-12 MEN’S ROWING NEWCOMER OF THE YEAR: James Wright, Fr., Stanford (Philadelphia, Pa.)
Wright made an immediate impact for Stanford this year, rowing primarily in the five-seat of the varsity eight boat. He helped the team earn bronze in the V8 and finish third in the team standings at the Pac-12 Championships. He’ll also compete for the Cardinal at the IRA Championships on May 31-June 2. Before coming to Stanford, Wright rowed in two junior national team quads (2017, 2018) and won the youth national championships in the single sculls (2018). He is the Cardinal’s first Pac-12 Men’s Rowing Newcomer of the Year since Austin Hack in 2012 and the second Cardinal all-time.

PAC-12 MEN’S ROWING COACH OF THE YEAR: Michael Callahan, Washington
For the third-straight year and ninth time in the last ten years, Washington head coach Michael Callahan is the Pac-12 Men’s Rowing Coach of the Year. With his 11th all-time honor, he surpasses previous Washington head coach Bob Ernst for most Pac-12 Men’s Rowing Coach of the Year selections. Callahan led the Huskies to its third-straight Pac-12 Championship and 10th league title in his 12 years at the helm of the program. Callahan has won the IRA National Championship six times, including five in a row (2011-15) and looks for his sixth at this week’s IRAs. The Huskies became the first team ever to win more than four-straight titles, dating back to the first IRA Regatta in 1895. Since 2008 when he took over the program, Washington has won the James Ten Eyck Trophy every year except for 2016, when Pac-12 rival California won. He is the 23rd Washington coach to be awarded the Pac-12 Men’s Coach of the Year.

By claiming the Varsity 8 competitions at the Pac-12 Championships, the Washington men and women headline the 2018 Pac-12 Rowing All-Conference teams, which were also announced by the Conference office Tuesday.