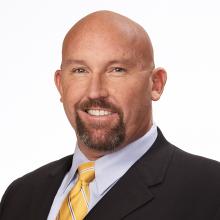 Veteran analyst Glenn Parker brings a wealth of broadcasting experience to his role as game and studio analyst for Pac‐12 Networks football coverage. In 2011, Parker served as a college football game analyst for Versus’ slate of Pac‐12 contests, as well as providing studio analysis for the network’s college football coverage. At the NFL level, Parker is currently an analyst for the Arizona Cardinals radio broadcasts and hosts the daily radio show “In the House” on 1290 AM The Source in Tucson. Prior to joining the Cardinals radio team, Glenn contributed to various shows on Fox Sports Arizona including the Cardinals postgame show and “Sound Off.” A graduate of the University of Arizona, Parker enjoyed a 12‐year career in the NFL as an offensive lineman for the Buffalo Bills, Kansas City Chief and New York Giants, playing in five Super Bowls.